About the Sacrament of Matrimony

According to the Latin tradition, the spouses as ministers of Christ’s grace mutually confer upon each other the sacrament of Matrimony by expressing their consent before the Church. The consent consists in a “human act by which the partners mutually give themselves to each other”: “I take you to be my wife” — “I take you to be my husband.” This consent that binds the spouses to each other finds its fulfillment in the two “becoming one flesh.” The Holy Spirit is the seal of their covenant, the ever-available source of their love and the strength to renew their fidelity. The priest or deacon who assists at the celebration of a marriage receives the consent of the spouses in the name of the Church and gives the blessing of the Church. (Catechism of the Catholic Church, 1623, 1624, 1627 & 1630)

Those preparing for marriage must make an appointment with our parish priest six months in advance of their intended wedding date.

Matrimony (Marriage) is a very important sacrament in the Church and as such there are requirements necessary for having a marriage in the Church. It is important to remember that marriage is a covenant made by man and a woman with God, a very sacred time in the life of the parties. Obviously this is not something to be taken lightly. With that, the Archdiocese requires six (6) months of preparation for couples anticipating marriage and the parties are to be married in a “sacred place”. Church law requires that both individuals must be free to marry, that is, neither one has been previously married. If either one was previously married and the former spouse is still living, a declaration of nullity must be obtained from the Tribunal on that prior marriage. A priest or deacon can assist you in starting the process. Under no circumstances may a date be set for the wedding, or even a tentative date set, until the Tribunal process is complete. In an interfaith marriage, (i.e. a Catholic marrying a non-Catholic), the Catholic person makes a promise to maintain his or her own faith and to do all in his or her power to ensure that any children born of the union will be raised in the Catholic faith. In addition, a permission/dispensation is required from the Archdiocese Chancery Office for interfaith marriages when freedom to marry has been established. The priest or deacon conducting the pre-marriage preparation/documentation will obtain this permission for the couple. For more information on the above, please contact our priest at 301-627-3255. 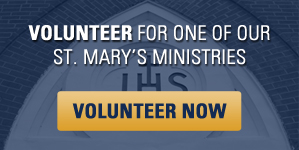 Our Lord Jesus taught, “From the beginning of creation, ‘God made them male and female. For this reason a man shall leave his father and mother and be joined to his wife, and the two shall become one flesh.’ So they are no longer two but one flesh. Therefore what God has joined together, no human being must separate.”
Mark 10:6–9