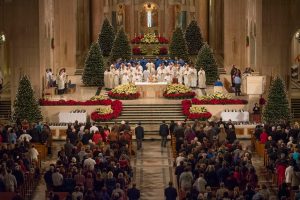 Washington, D.C. —Ken and Lucille Arnold were presented with the 2017 “Manifesting the Kingdom Award” at a special Mass at the National Shrine of the Immaculate Conception on Epiphany Sunday. The awards were given by Cardinal Donald W. Wuerl to a parishioner or couple from each parish in the Archdiocese of Washington.

Cardinal Wuerl, Archbishop of Washington, first instituted the tradition in Washington six years ago in celebration of the 25th anniversary of his ordination as bishop on Epiphany, January 2, 2011, by honoring 201 parishioners from parishes and Catholic organizations throughout the Archdiocese of Washington for their dedicated service to the local church.

Recipients were nominated by their pastors, religious communities or other organizations, and range from young adults to people in their nineties. Most are volunteers, helping with service ministries, including the St. Vincent de Paul Society, prayer and liturgy, religious education, maintenance of the parish property or for doing the many small, yet important things that make a parish run smoothly.

St. Mary of the Assumption Pastor Fr. Thomas LaHood said he nominated the Arnolds because of the many ways they help the parish. Ken is a scout leader and a Eucharistic Minister; Lucille and Ken both run the First Communion retreat for our second graders. They also help our parish in so many small but significant ways. They have adopted children from Ethiopia. “They truly manifest the kingdom to us here at St. Mary’s,” said Fr. LaHood.

St. Mary’s Deacon Honored for 50 Years of Service to Knights of Columbus 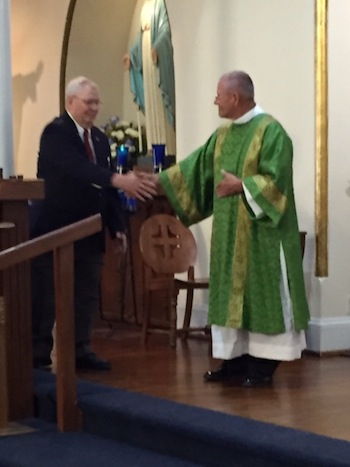 Deacon and Brother Knight Frank Klco achieved a very important milestone in the Knights of Columbus. On April 1, 2015,  Deacon Klco celebrated 50 years of service to the church and community as a member of this Family, Fraternal Service Organization founded by Father Michael J. McGivney in 1882.  It is a honor to have Deacon Klco as a member of St. Mary of the Assumption Council, No. 9302 and it was a great honor for current Grand Knight, George Floria, to recognize Deacon Klco with his 50-year lapel pin, his Honorary Life Member lapel pin & certificate, and a special 50-year desk statue for his years of dedicated support of the principles of the Knights at a recent Mass.

In celebration of its 75th Anniversary, the Archdiocese of Washington is presenting service medals recognizing individuals and organizations that have generously given their time, talent and treasure to parishes, schools, and archdiocesan corporations.

According to the Archdiocese of Washington’s office of communications, those who qualify must be practicing Catholics or non-Catholic active supporters of the church whose time is deemed extraordinary, or an organization that exemplifies the values and mission of the Catholic Church.

Father LaHood chose Mr. Braswell to receive the honor with the recommendation of the SMA Pastoral Council. Fr. LaHood said it was very difficult to choose just one member of the parish.

“Rob a long-time member here and he is very supportive of any effort that the parish makes,” Father LaHood said. “He has been in a number of ministries and committees here at St. Mary’s, such as the Pastoral Council, School Advisory Board, CYO, Lector Ministry, and has supported various parish communication and marketing efforts including a recent renovation of the parish website and a review of parish information technology policies. He lends his support to many efforts at the parish and in the community.”